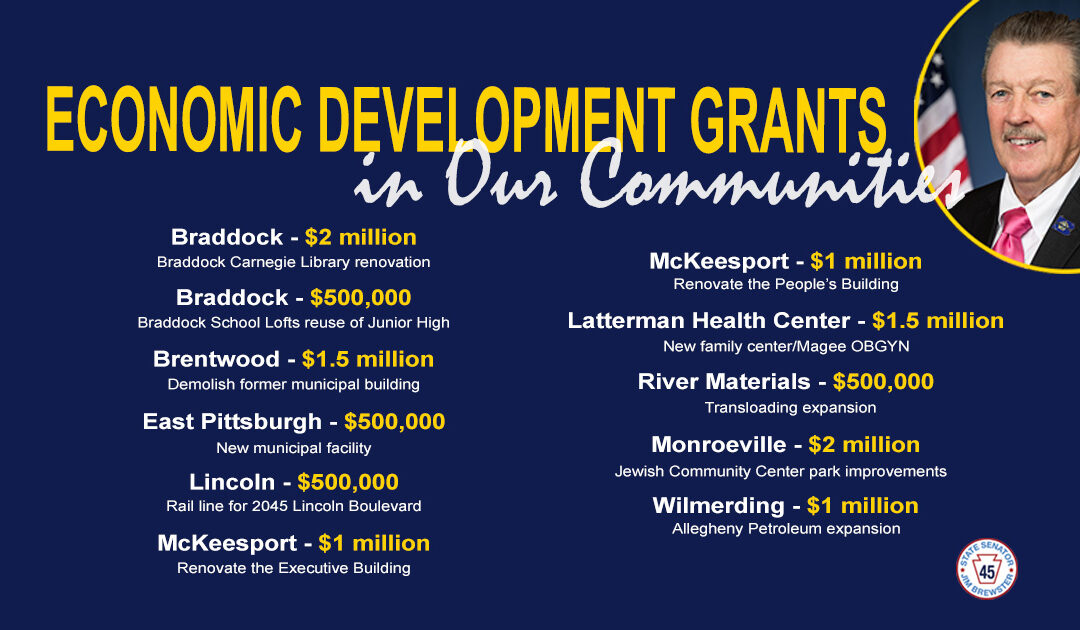 “These state grant programs are extremely competitive and the great coordination between government and business in my district helped win significant investments in the region,” Brewster said. “Economic recovery is not done with miracles. It’s done through hard work, strong vision and consistent cooperation among state, local and business leaders.”

The money is being awarded through Pennsylvania’s Redevelopment Assistance Capitol Program, administered by the Office of the Budget for the acquisition and construction of regional economic, cultural, civic, recreational, and historical improvement projects.

Projects in the 45th Senate District include:

Braddock – Braddock Carnegie Library Association – $2 million – The BCLA’s overall renovation will create universal accessibility and year-round access to all three floors of the building while upgrading ADA accessibility. The primary focus of these funds will be to renovate and modernize the BCLA’s historic Music Hall. Renovation of the historic Music Hall and addition of amenities will allow the BCLA to host professional acts, performances & convenings.

Braddock – Braddock School Lofts – $500,000 – The project will focus on the adaptive reuse of the Braddock Junior High School. It will revive the historic façade and features of the structure while introducing community-based amenities and quality living space; repair the deteriorated elements of the building; and replace all broken or missing windows with high-performance replications. The existing building envelope’s historical integrity will be maintained, requiring an interior insulation approach. All building systems, including HVAC, plumbing, fire protection, and electrical, will be upgraded.

Brentwood – Economic Development – $1.5 million – In this project, Brentwood Borough will demolish its vacant former municipal building to the subgrade level. Asbestos and other hazardous materials will be professionally remediated. The site will be restored to pad-ready condition.

East Pittsburgh – Municipal Facility – $1,00,000 – This project will demolish the old gymnasium facility and construct the new municipal facility that would be centrally located to a majority of the residents. It will allow all borough services to locate in the same building, simplifying communications and overall operations. It would also move the public works department closer to the salt and construction storage area. The entire area will also be repaved and re-seeded, resulting in a net decrease of impermeable surfaces compared to the current condition.

Latterman Family Health Center – New Family Health Center and Magee OBGYN – $1.5 million – This project will construct a new family health center. It will expand operations and the number of exam rooms to provide ample space for patients as well as current, and future staff.

Lincoln – Rail Line for 2045 Lincoln Boulevard – $500,000 – This project includes the installation of a new mainline switch to the facility, the removal and reconstruction of existing track and the construction of new, additional track, as well as renovations to the rail scale improvements in site drainage to address frequent flooding at the rail scale location.

McKeesport – Executive Building – $1 million – The Executive Building is no longer condemned, and businesses are moving into its retail spaces. This project will help address the major mechanical concerns for long-term viability and stability. It will also allow a faster renovation timeline.

McKeesport – The People’s Building – $1 million – The People’s Building is no longer condemned and there are only a few small obstacles preventing occupancy for tenants. This project will address the major mechanical concerns for long term viability and stability. It will also speed up the renovation timeline which will allow developers to build out space for tenants faster.

River Materials – Transloading Expansion – $1,00,000 – With the aid of an RACP award, RMI plans to purchase the final piece of the site from RIDC and double its current dock capacity. Through this expansion RMI will have the area to fleet more than 65 barges. RMI is presently in negotiations to lease the five rail lines adjacent to their property to allow for expansion of the site to include rail to ground, river or trucks along with the loading of railcars with various commodities. RMI expects this will increase employment with the addition of 30 plus well-paying jobs in the Mon Valley region of Pittsburgh.

Monroeville – Jewish Community Center Family Park Facility – $2 million – This project includes renovations/improvements to four areas of JCC’s Monroeville Family Park facility: aquatics center renovations, including liner replacement and related filter/grating; renovation and addition of activity areas at the site, including the addition of much needed shaded play areas; construction of a new indoor building with classroom space; construction/renovation of kitchen and dining area to facilitate meal preparation and dining needs during the summer.